I bred Ladima in 2003 from my thoroughbred mare Love Hill xx. She was a thoroughbred mare who was tested on the race track, then was used for hunting foxes with dogs and afterwards she started her career as a broodmare in  our stable at the age of 16. Three foals were born before she passed away at the age of 23.
Ladima’s own first big appearance was at the “Oldenburger Derby” in Garrel-Varrelbusch in 2005, where she won the Oldenburg Derby (a race for three-year-old Oldenburger horses)

As a three-year-old she completed her mare’s performance test with the jumping mark of 8.5 and later she had numerous successful achievements in jumping and dressage tests. At the age of six, Ladima started her first A-Eventing, which she won with her rider Janita van der Kamp-Knies! Ladima’s speed and her galloping joy stands out, and she simply jumps everything that stands in her way. Although not the pure dressage type, she was also victorious in A-dressage competitions and was therefore placed in class L. It is, in the truest sense, a versatile horse! Unfortunately, she hurt herself on the way to the higher classes, so she had to finish her tournament career.
In her “second career”, she is now a recreation horse and broodmare. Her easy-going nature is passed on to her foals, which is very important for my breeding. 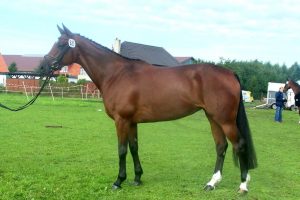