I `ve bought Shampagna  with 1 ½ years from my brother-in-law Peter Wreesmann-Grever and with this purchsase, the old tribe of my father-in-law moved back into our stable. Shampagna comes from the highly successful Trakehner Dressurhengst Imperio, of which the blood connection to the thoroughbred stallion  Vollkorn xx in the rear generations attracted me. At the age of three, Shampagna was awarded the state premium in Vechta and has made a very good mare’s performance test. Since she is a late developer, she started competitions at the age of five years and she was  placed in A-level dressage  tests several times .  She has won and was placed in dressage tests in L-level in 2017 and was placed in level M at the end of the season, too. 2018 she won and was placed in level M and after these succesfull season sold to an young dressage rider in Estonia. She is successfull for Estonia in international youth dreaage classes. We are glad to hear from Estsonia from her! 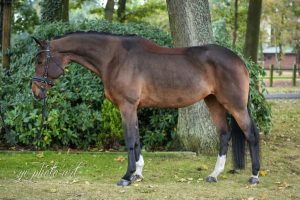